Let me deliver this to you straight:

Dark Souls is the answer to the absurd (and absurdly specific) question, “What if Chaucer’s The Canterbury Tales was made into a balls-hard dark fantasy role playing game?”

No? Not obvious? I’m not even the first person to make the link. Okay, let me offer an excuse for my insanity by sharing some observations of mine.

This part’s a no-brainer, I think. Dark Souls has — at first glance — the rather standard “Dark Ages” aesthetic shared by many fantasy games, from Dungeons & Dragons to Dragon Age to other things with dragon in the title.

Even as early as my first hour with the game I found myself strongly reminded of The Canterbury Tales — most of the armors and weapons in the game resemble real suits of armor and weapons from the 1300s. (Although they’re definitely more “superhero,” a product of the game’s fantastical setting.)

The architecture — or at least the locations from the first half of the game — are also incredibly reminiscent of existing structures, as are many of the props, although this isn’t anything new to the genre. 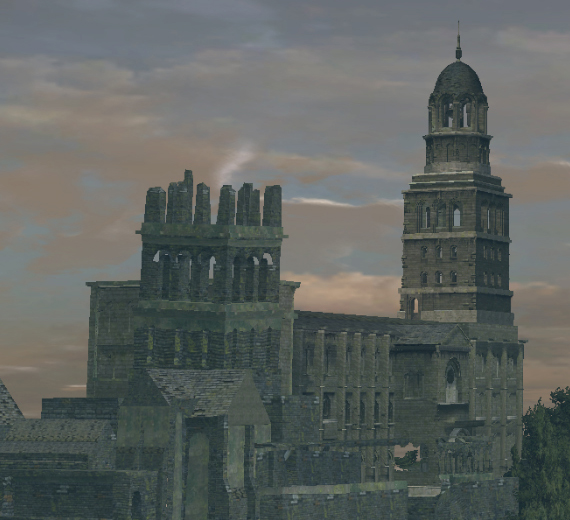 Dark Souls isn’t known for its cast of characters. Most of the game is spent in isolation, with only your tears to give you company. But it is an RPG, and it has plenty of non-player-characters — just not as many as most RPGs.

Many of these characters just so happen to resemble or mirror the characters in Canterbury Tales. I’ll start from the least obvious comparison and work my way up from there. Expect a few leaps of logic and generous applications of imagination on my part.

Let’s begin with the character who jump-started this idea of mine.

The Friar – Petrus of Thorulund

The connection here is tenuous, but still clearer than many of the others. In Canterbury Tales, the Friar is a seemingly pious man who secretly accepts bribes and seduces young virgins. In Dark Souls, Petrus the friar serves the priestess Rhea and is one of the first characters encountered in the game. When you first meet him he seems like a model of virtue; he’s patient and helpful, if a little snotty.

Much later in the game you may eventually discover he plans to kill Rhea, and if you confront him he degenerates into a raving lunatic. No explanation is given for this, but I think it can be inferred that he was either bribed to murder Rhea, or she spurned his lecherous affections and he reacted violently.

The Wife of Bath – Gwynevere

In Canterbury Tales, the Wife of Bath is described as a lusty, larger-than-life figure, and she tells a tale of a knight seeking redemption for his sins from Guinevere, King Arthur’s Queen, who gives him a quest. Long story short (and abridged to the point of inaccuracy), the story-knight meets an old woman on his quest who agrees to help him if he marries her. After the marriage it is revealed that the old woman is not all she seems. (Seriously, I’m reducing the Wife’s Tale to the marrow of its bones here.)

In Dark Souls, about midway through the game, the main hero finally meets Gwynevere, who’s basically Lordran’s version of Aphrodite. She’s not lusty, but she is larger-than-life — almost literally, since she’s a fifty-foot-tall woman. In truth, she doesn’t really resemble the Wife of Bath at all — but there are similarities with characters in the Wife’s Tale. Notably, like the old woman in the story, the Gwynevere met midway through the game turns out to be an illusion designed to test the main hero.

Plus, you know, her name’s Gwynevere.

The Narrator – the Player This one is kind of a cheat, but it’s so obvious I need to mention it anyway. In Canterbury Tales, the narrator (who may or may not be Chaucer himself) is a silent, sullen pilgrim who freely admits to being naive.

Naturally, the main hero of Dark Souls (whoever he or she may be) rarely says a word, never smiles, and is a newcomer to the violent and deceptive world of Lordran. Besides that, the fates of most of the supporting characters depend upon the whims of the protagonist, just as the Canterbury pilgrims’ fates are determined by Chaucer. The connection ends there, but it’s more than enough.

The Tradesmen – the Blacksmiths

There’s nothing special about this one either, it’s just a clean parallel. In Canterbury Tales, among the pilgrims are five traders of differing skill sets who have formed a guild.

In Dark Souls, there are five blacksmiths — although one is turned to stone before you meet him — and each one possesses a unique skill. Cut and dry, but notable.

The Knight – Siegmeyer of Catarina

and The Squire – Sieglinde of Catarina I initially considered drawing a parallel between Sir Solaire and the Knight, but he isn’t really applicable here. I won’t write out a whole connection between him and one of Chaucer’s characters, although if I were to do so, he would probably resemble the Parson the most.

But anyway, in Canterbury Tales the Knight is a capable warrior who’s been adventuring for most of his life, yet his nature is ultimately gentle and meek, and he tries to avoid conflict. He joins the other pilgrims with his son, the Squire, and he prefers uplifting stories of heroism.

In Dark Souls, Siegmeyer, a knight of Catarina, can be found all throughout Lordran. He’s an impressive combatant and has come to Lordran to seek adventure, but he is often stumped by the land’s many obstacles. He is personable and always cheerful, and expresses keen delight whenever the hero vanquishes a dangerous enemy or solves a difficult problem.

Siegmeyer’s daughter, Sieglinde, can also be found in Lordran. However, her similarities with the Squire do not extend very far: unlike the Squire she is clear-headed and mature, and she follows her father on his pilgrimage with the intent of keeping him out of danger.

In fact, she seems like a Gender Flip of the character: the Squire is described as wearing jewelry and showing an interest in singing and puppy-love crushes (typically “girly” traits), while Sieglinde operates as little more than a loyal and accomplished soldier (typically “manly” traits). Either way, when considered together these two onion-armored characters fit the bill pretty well.

The Pardoner – Oswald of Carim In Canterbury Tales, the Pardoner is described as an androgynous man who sells fake relics and offers absolution of sins for personal gain, and supposedly indulges in excessive preaching whenever in a church. Likewise, the Pardoner of Carim in Dark Souls can only be found in the Undead Church, where he makes grand speeches to you while speaking in an effeminate voice, and will wipe your name off “the Book of the Guilty” for outrageous prices. Coincidentally, his name — Oswald — is shared by a different Canterbury character, the Reeve.

The most obvious comparison. Hell, even the Dark Souls wiki admits Oswald was probably based on the Pardoner.

Something else stuck out for me early on while playing the game. Let’s touch on the plot of Dark Souls — don’t worry, there isn’t much to it.

Like in most RPGs, the game begins with your character stuck in a cell. After breaking out, your unnamed hero is transported to the beautiful but malicious world of Lordran, where they begin a quest to locate the Bells of Awakening and ring them. This setup alone doesn’t bear much resemblance to Chaucer’s story, but the dainties are in the details: 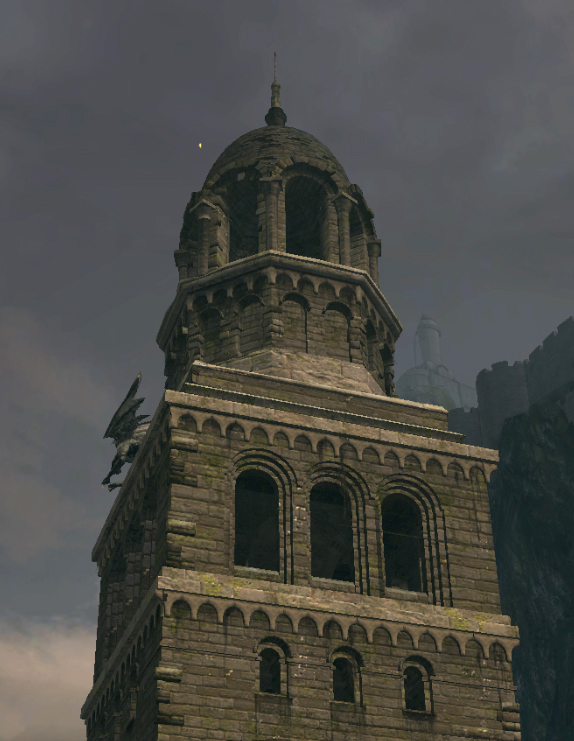 For one thing the game’s narrator explicitly refers to the hero’s journey as a “pilgrimage,” and it helps that both Bells are church bells: one set at the top of a cathedral clearly inspired by similar Christian structures, the other set deep under the earth at the base of an ancient shrine reminiscent of a Greek temple.

There’s more. When the hero first arrives in Lordran and learns of their pilgrimage, they also learn that they are the latest in a long line of travelers who have attempted the pilgrimage, and that even now there are others like them following the same road but on different planes.

This brings me to the clearest parallel with Canterbury Tales: one of the most striking features of Dark Souls is its dynamic and unusual multiplayer system.

It’s technically a single-player game, but they recommend you always play online. As your hero explores and triumphs against the monstrous denizens of Lordran, he or she will find magical bonfires where they may rest and recover lost vitality. These bonfires are in commune with concurrent planes of existence, and sometimes pilgrims from these planes — other players — will appear in yours and share a quiet moment with you.

The other pilgrims are not completely silent, however: there is a mechanic in the game where you can leave messages for the other pilgrims, and you gain bonuses depending on how well your messages are received. Not all of these messages are helpful, and sometimes they’re little more than flavor for your journey — stories from other pilgrims like yourself; stories meant to teach you or harm you or make you laugh. Besides all of that, according to Wikipedia Canterbury Cathedral became the classic place of pilgrimage it’s known as today because somebody was murdered there: Archbishop Thomas Becket was killed within the cathedral itself and subsequently canonized.

In Dark Souls, in the Undead Church (the location of the first Bell of Awakening), you eventually come across a charred human corpse in the chancel. (See screenshot.)

When you inspect the corpse you pick up a Fire Keeper Soul, which in the world of Lordran is comparable to discovering the soul of a saint, and it can be used to strengthen the magical bonfires that connect the inter-dimensional pilgrims together. (There’s a sentence I can safely say I’ve never written before in my life.)

This is probably a big, fat coincidence.

Indeed, the content of this entire post is probably a big, fat coincidence, but I’m a sucker for conspiracy theories and I had a lot of fun writing this.

So thanks for reading.