I won’t even try to explain why I stopped writing on this blog or why I’m picking it back up again now. I just, like, want to. Still, seeing as this is my first post in two years or something, you shouldn’t expect it to be long. Or good.

(And stuff I don’t. Maybe a lot more of that, actually.) 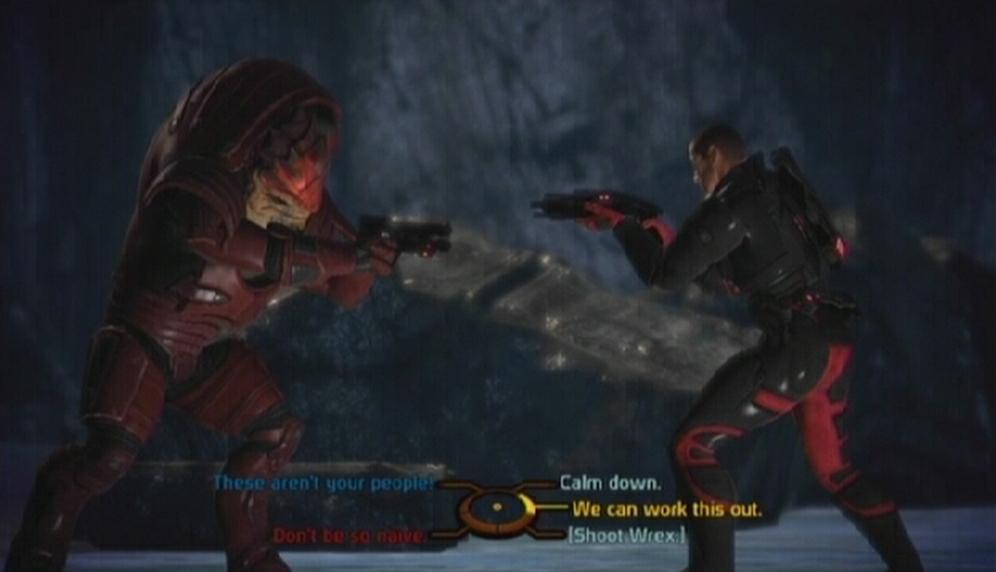 This is Mass Effect. See the little colored text at the bottom of the screen? That’s the dialogue wheel. You use the dialogue wheel to make choices — often choices between an altruistic action and an unmerciful or uncompromising action. The former are “Paragon” actions and the latter are “Renegade” actions.

Usually, these choices and their consequences are made quite plain to you — even when you disagree with the game over which decisions are good and which are bad.

This is the problem with morality systems: when you play a game that possesses one, you are at the mercy of what the game developers consider “right” and “wrong.” I’m not saying games shouldn’t have moral choices, obviously. I’m saying that the game shouldn’t tell you which decisions were good and bad. In fact, the game developers should just keep their opinions to themselves.

After all, it’s really a matter of perspective. Let me elaborate by using an in-game example of what I’m talking about:

In Mass Effect 2 you play as Commander Shepard, a Space Marine who behaves more or less like a modern human being would behave. By this I mean that the character’s Paragon actions usually correlate with what we/you/I would consider just or merciful. However, what we consider “Paragon” and “Renegade” is often influenced by our culture.

For contrast, let’s look at another character from Mass Effect 2: This is Samara, an Paladin-type warrior and a member of an alien species called the Asari. She follows a somewhat amorphous philosophy known only as the Code — she basically polices the galaxy looking for wrongdoers and punishing them.

However, she is also endorsed by the entire Asari species to do what she does. In short, if you played as Samara instead of Shepard, then playing her as an unmerciful, uncompromising murderer would be considered the Paragon path.

Imagine playing such a game, where the game developers judge you morally superior for behaving in such a manner. It would suck. Obviously, the real game rarely feels like this, since the morals of the game developers seem to match up with most gamers’ sensibilities. But not always, and let me tell you, it is extremely vexing to play a game the way you want to — to adhere to your own Code — and be labeled as a Renegade.

Frankly, the opposite is worse: earning a Paragon reputation for doing what you would personally consider a Renegade action.

So, game developers, please quit it with the morality systems or change them or something. They’re getting on my nerves and making me feel mildly annoyed. Am I nitpicking? Well, yeah, but that’s what I’m here for, right?

Anyway, thanks for reading. Sorry about the rather misleading title — I could have probably called this post “Why Samara is a Terrible Human Being” and it would have been more accurate.

Then again, she’s an extra terrestrial. So . . . forget what I just said.