Recently I’ve been contemplating the meet cute, which is the term for how two people destined to fall in love in a story meet. Think of your favorite romantic movies, and then remember how the two characters meet for the first time. The meet cute is a great tradition. Guess what, though? Strangely, when I think of specific films the meet cutes aren’t all that impressive. Think of your own and let me know later if they stand up to the meet cute test: were they really that cute?

So, the meet cute may be trickier to write than it seems. Here’s something that could be key: anticipation. The more we, the audience, know the two characters before they know each other, the more excitement generated for the meet cute. Think of Gone With The Wind. You know someone is going to be the guy for Scarlett, and you know that Rhett is Da Man, and you know Rhett is hiding out in the library when Scarlett throws herself at Ashley first, and then throws the figurine at the fireplace second, and you can’t wait for Rhett to rise from the sofa and announce himself to her. “Sir, you should have made your presence known,” says Scarlett. The payoff is so lovely because of: Anticipation. 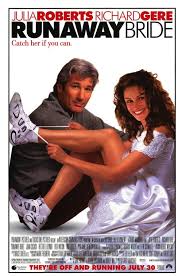 Thus, for your consideration of the meet cute, I give you Runaway Bride. Let the groaning commence, men. (Bride is most definitely a chick flick.) Julia Roberts is cast to be irresistible and Richard Gere is cast to be despicable (for a while, until he manages to become charming, eventually). In case you are unfamiliar with it, or have blocked it from your memory, this film begins with Gere, a newspaper columnist, searching for a last-minute topic. Wracking his brain at a bar, he hears the story of a woman who leaves a man at the altar. He names said woman The Maneater, pounds out his column about her, and calls it a day. Opinion of Gere’s character established.

Next scene goes to Roberts, in small town life, as the newspaper article comes to her attention. She’s sweet and the column is ghastly. Wonderfully, she decides to write to the editor (a woman who is Gere’s ex — ah, the convenience of storytelling) and complain about the column’s lies and to hint at a law suit. Plucky gal is instantly likable.

Back to Gere getting, much to his surprise, canned from the newspaper. He’s a cocky SOB, but someone has to have an arc, after all, and it seems (at first glance) that he’s the character to do so. Fired but not cowed, he goes to small town Roberts-ville to get the true story. See how much plot and character development has been established before these two have ever met? Looking good.

Gere, wandering town, ends up in the Curl Up and Dye hair salon where Roberts’ best friend (the magnificent Joan Cusack) shows her loyalty. She and Roberts, who happened, unbeknownst to Gere, to be lubing a recalcitrant beauty chair, team up to dye Gere’s hair a rainbow of temporary color. The two future lovebirds meet over Gere’s humiliation, and the story is off and running. Whether or not the movie is as good as its meet cute, I’ll leave as a topic for another day. (Hint: I, a chick, like it.) For now I only submit the movie for its opening scenes.

I find the meet cute to be an endlessly fascinating topic, so I will return to it again. For now I will say that the moment’s inherent “cuteness” is dependent on not just the contrived situation but also on the character development that is revealed. A great meet cute will have both elements.