Originally posted to the internet March 25, 2010

My good friend asked me to read William P. Young’s The Shack and give my thoughts. I’d never heard of the book, but have since learned of its cachet in the faith community. I admit, because of this reputation, I began the book with some trepidation. As you will see, my uneasiness with its popularity grew into an active disappointment in and dislike of its theology. 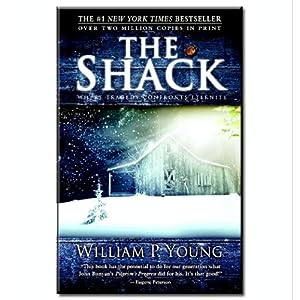 A fictional novel, The Shack starts out as a murder mystery. Mack, a loving father and husband, has a “Great Sadness.” Flashback in time and we learn that his young daughter, during a family camping trip, was kidnapped (and murdered) by a serial killer. Hoo, boy. My days of reading Tami Hoag or Iris Johansen are long over. Spending time with evil, no matter how fictional, is something I try to avoid. However, Young needs to get his hero into a spiritual crisis. No one can doubt that a kidnapped child could lead a parent to a faith meltdown. I understand why Young chose this plot avenue, but that doesn’t mean I like it.

Three years after Missy’s kidnapping Mack receives a mysterious note telling him to meet “Papa” (his wife’s word for God) at the Shack, a nightmarish cabin in the woods where Missy’s blood-soaked dress had been found, verifying her death. Mack goes to the Shack on his own and with his eyes open. Could the note be from the killer trying to trick him? Mack is receptive to the possibility that the note is from God, secretly even hoping such a miraculous event could be true, but pessimistic about the odds. The note is from God, though, and He is waiting for Mack at the Shack. This is the point I stopped reading intently and began to skim because Young’s Trinity was utterly offensive to me.

God, or “Papa,” manifests Himself as a black woman.

Look, I don’t give a rat that Mr. Young’s God is black. When I think of God I don’t assign any pigment to Him at all. The offense is to make Our Father a woman. Have men become so disregarded and emasculated in Western culture that Young cannot craft a believable God unless He is female? If God needs to show empathy and love (and a knack for home cookin’!) then make Him a woman?

Yes, it gets worse. Young’s God is Scarlett O’Hara’s Mammy, including — I kid you not — a “Sho nuff!” God is written as the tired and bigoted archetype of the Magic Negro. Jesus manages to keep his Middle Eastern Jewish heritage, and He’s so awesome to hang out with! The Holy Spirit is an Asian woman. Later on, when God shows His aspect as Judge, He’s an Hispanic woman. It’s a multi-culti party of happiness! Hurray for Girl Power and Down with the Evil White Man!

I’m so sorry to see a Christian lost in the PC winds of our culture. Young tries very hard to explain Christian theology to the world through his dialogue between the Divinity and Mack. The Shack is very popular, so Young has obviously succeeded with many people. To bring even one soul to Christ is our greatest purpose on this earth, and Young is doing yeoman’s work. Who am I to criticize? How many souls have I brought to Christ?

If I am wrong, so be it, but I cannot keep quiet when I see Please Us Squeeze Us Jesus paraded around. Jesus is our King. We don’t link arms with Him, we bow to Him.

I will give credit to Young for this moment as God (in Hispanic judge form) responds to Mack’s anger that God would let Missy suffer:

When pressed, Mack responds, “‘Could I go instead?'” The Judge answers, “‘Now you sound like Jesus.'”

For a moment Mack understands sacrifice. The easiest path to God sometimes is to think of our own children: what we would give up for their sake and what we would watch them endure as they find their way to maturity; where we can help and where we must step aside in order to respect their autonomy.  I honor Young for successfully using this parental example. He could have continued the metaphor farther, though.

Our objective as parents is to raise honorable, loving adults. Our objective as followers of Christ is to be honorable, loving adults. Jesus may “suffer the little children,” but the grown-ups are called to take responsibility for their actions. Blaming God for our free-will-driven mistakes is not adult. Having Mammy and Jesus Duuuude! indulge Mack while he throws a temper tantrum in the midst of a fallen world is just bad parenting on Young’s part. Our Father is a man we respect, honor and obey. We don’t whip up a batch of biscuits with Him. He is our strong right arm, not our breast.

And this is where my problem with this novel truly lies, the point where the Catholics will diverge from the Protestants: A Catholic writer would never turn God into a woman because we have Our Lady in heaven. Our devotion to the Blessed Virgin Mary fulfills our need for a spiritual mother. Who better can understand Mack’s pain at losing a beloved child who is tortured before death? To relegate Mary to a corner of heaven is to deny yourself not only a sympathetic comforter but also an indefatigable ally. Pray for us sinners now and at the hour of our death.

Without the intercession of the Blessed Virgin Mary you live in a Motherless world. No wonder Mack is overwhelmed with despair! His world is so empty, confused and sterile:

“In seminary he had been taught that God had completely stopped any overt communication with moderns, preferring to have them only listen to and follow sacred Scripture, properly interpreted, of course. God’s voice had been reduced to paper, and even that paper had to be moderated and deciphered by the proper authorities and intellects. It seemed that direct communication with God was something exclusively for the ancients and uncivilized, while educated Westerners’ access to God was mediated and controlled by the intelligentsia.”

I assume Mack’s seminary was not a Catholic one! God has stopped communication? Mary visits us all the time as a messenger for her son. The tilma of Our Lady of Guadalupe is no paper to be “deciphered by authorities.” Also, miracles happen every day in the lives of our saints. Communication with God is reserved for the ancients? What about the example of Saint Gianna, who died in 1962 and was canonized a few years ago? A modern woman, united with Christ, St. Gianna suffered a mother’s agony. Mack may have found comfort in her strength. What about Blessed Pier Giorgio Frassati? Dead at the age of 24, Frassati was no aged holy person, like Padre Pio or Mother Teresa, but a vibrant young man with a joyous devotion. When Mack began to doubt, he may have found reassurance in the enduring faith of Blessed Pier.

The Communion of Saints means that, through them, God is everywhere. They are all around us, ready to intercede on our behalf if only we will ask them to pray with us. Mack’s loneliness is so sad when one considers the unseen Catholic community jostling and bustling beside him, waiting to be recognized. The spiritual world is packed, standing-room-only, while simultaneously having room for millions more. Ultimately, my complaint with The Shack is its poverty. A faith that has God popping into different roles, Mammy here and Senora Justice there, is so lacking in riches. Heaven overflows with loving beings who know intimately the pain of this world. Attempting to change the eternal nature of God the Father is completely unnecessary.